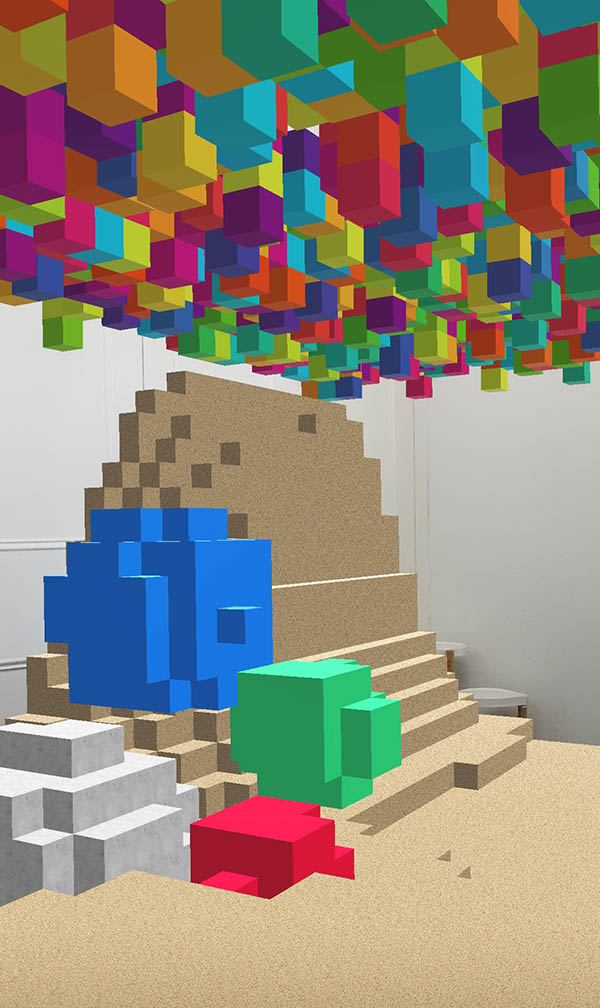 Now that we are comfortable working with the HoloLens and viewing holograms in space, we're ready to connect to Rhino and start creating interactive experiences. I've modeled a holographic 'sand pit' in Rhino to encourage users to pick up and move parts of the model around and play with their own designs, and in this article you will learn how to make changes both on the HoloLens and in Rhino.

Streaming the sand pit model to the HoloLens

Make sure your HoloLens and PC are on the same WiFi network and Fologram is running. If you are not at the Looking for QR code screen (perhaps because you are still looking at the Tallinn example model), Tap and Hold to open the Fologram menu, then tap on Settings > Restart.

Now start Rhino on your laptop or PC, and open the Fologram Sandpit.3dm file attached to this article. Type the Fologram command to open the Fologram plugin window, then click on the Connect a Device button to display a connection QR code. Look at this QR code with the HoloLens to connect to Rhino.

Once you've connected, tap to place your Rhino model on the floor of your space. If you run into any issues at any of these steps, check out the trouble shooting help on our Community.

Playing in the sand pit

You can grab and move all of the boxes in the sand pit by hovering over them with your cursor and then dragging. Note that HoloLens 1 users can also use hand rays in Fologram and we do not use head gaze for any user interactions. Try picking up and moving a few boxes to spell out your nick name: Sean, the Fologram for Rhino product manager, has boldly volunteered to provide an example here. You can probably find any colours you might need in the holographic ceiling. Once you're happy with your work take a holographic picture from the Home menu (tap your wrist on HoloLens 2 or make a Bloom gesture on HoloLens 1)

Adding objects to the sand pit in Rhino

Try modelling some new objects in Rhino. These will be 'synchronized' with the experience on the HoloLens and will also be interactive. You can assign these objects materials that will also be synchronized.

Try piling some holographic sand on desks in your space, or design an undulating topography for the floor. You might also design some new window frames or augment other physical objects in your room.