Download the guide as a pdf for offline use with the link above.

If you have completed either of the Beginner's Guides you may have spent a while trying to position your model with the physical space of your room only to accidentally lose tracking and have to repeat the process all over again. This is tedious and avoidable! If you have access to an A4 printer, you can generate placement QR codes in Fologram that can be physically fixed in space and used to precisely and repeatably place and orient your models in mixed reality.

Run the FologramQR command n Rhino or click on the Create QR button in the Fologram Toolbar to start creating a position QR code. Rhino will now prompt you to draw a rectangle defining the position and origin of your QR. Type 0,0,0 and hit enter to specify the origin of our Rhino model as the position of the code, then click anywhere in the positive x and positive y quadrant to set the orientation of our code.

Now we can specify some properties for our QR code.The Code_Size_Millimeters property allows us to create codes of any size. Large codes will track better from far away, small codes may be more convenient. The default size of 180mm is a good size for printing on A4. We can also specify a page size for the PDF and optionally include a screengrab from Rhino to remind us where the code is supposed to go. Hit enter to accept the default settings and create a PDF. I've also attached the QR code to this article - it is useful for placing the origin for any model.

Run the -FologramQR command (including the preceding hyphen) for additional options in how the QR code should correct for model placement when detected. Axis_correction automatically detects if your QR marker is on a flat surface (ie. the ground or a wall) and accounts for this by snapping to the vector that sets out this alignment. This means you don’t need to worry about creating completely levelled surfaces for your QR markers to sit on - Fologram automatically accounts for this and levels your QR marker on a plane. Include_Rotation gives you the ability to embed or remove rotational data. When working with multiple QR markers, it is recommended you turn this OFF to avoid rotational error resulting from human error when laying out the markers. Your model will automatically align rotation after scanning two QR markers. 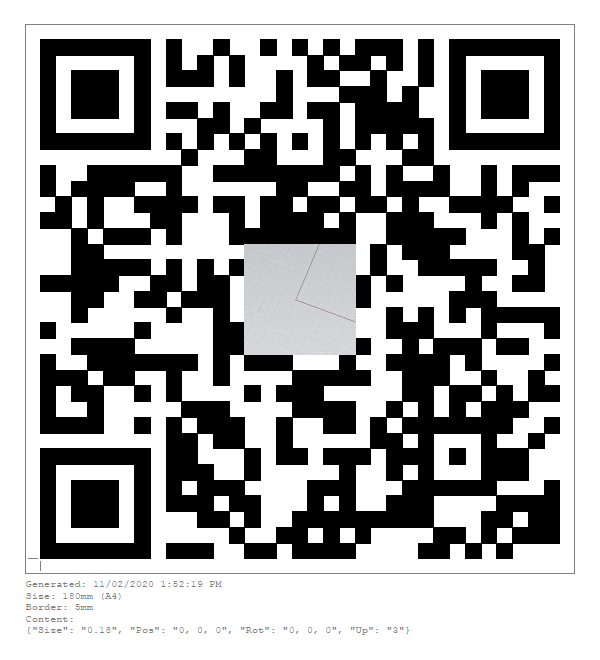 Placing your model on the QR code

OK - now print your PDF at A4 and be sure that you print at 1:1 scale. Don't shrink to fit! Use some tape to fix the QR code on the ground where you want to place your model origin. Launch Fologram and load a model or connect to Rhino. On mobile, tap the Edit

button then tap the Snap

button to begin scanning for placement QR codes. On HoloLens, tap and hold to open the menu then tap Snap. Position the code within the camera frame on your screen and hold your head or phone steady until you get a confirmation message that your model has been placed. Avoid doing this in bright sunlight, or with shadows across the QR code that can interfere with tracking.

You can move the code around if you like, just tap the Snap button again to re-place in the new position. If your device loses tracking after walking around the model, or you start to experience some drift in the model from its correct location (this can often happen when filming someone work with the HoloLens, where differences between what you see on mobile and what you see on device become quite apparent), just re-place the model on the marker to correct it.