1. Recording video from Fologram for Mobile

If you have multiple devices connected to the same experience, make sure all devices have placed their model in the same position using a QR code to ensure recording interaction with holograms (especially on the HoloLens) is an accurate representation of the experience for other users.

2. Record your screen on Mobile

Most modern phones support screen recording that will allow you to capture video of the Fologram UI (layers, sliders, menu etc) as well as first person mixed reality footage. This can be especially useful for demonstrating what the experience of the app is like. On iOS devices, follow Apple's step by step guide for screen recording. On Android, download a screen recorder like MNML and follow the app instructions to record your screen. 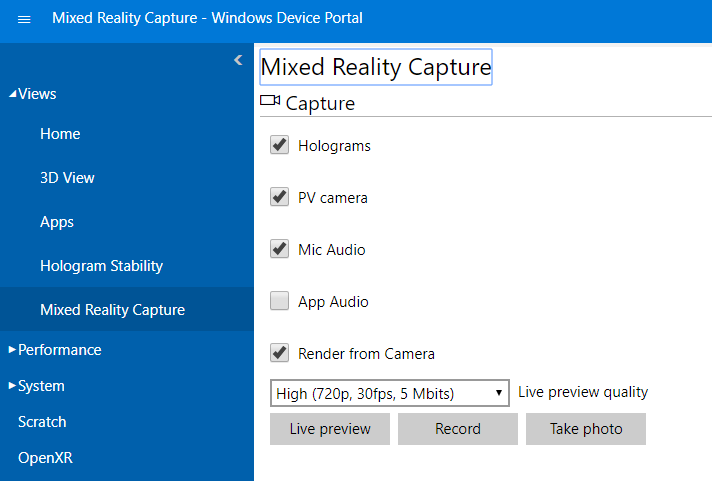 Fologram makes it easy to access device portal and stream what you see through the HoloLens. Once you've started Fologram on the Hololens and connected to Fologram for Rhino, click on the device name in the Fologram for Rhino plugin window to open device portal. You will need the user name and password for your device from the administrator to log in. Then click on Views > Mixed Reality Capture to open the capture window, and click Live Preview to stream first person video from your HoloLens. To save a recording of the stream, click Record instead. You can download the recording from your HoloLens from the list of videos and photos at the bottom of the window.

from the Windows Home menu on the HoloLens. If you want to stream to your laptop of PC you might have to enable projecting to your PC first. Check out this guide from LaptopMag for how to do so.

For more ideas for capturing and streaming media from the HoloLens, check out Microsoft's article on Holographic Capture.